COLUMN ONE
A passage buoyed by hope alone

Thousands of Senegal's young men take to the seas each year, bound for Europe. It takes courage to make the journey, luck to survive. 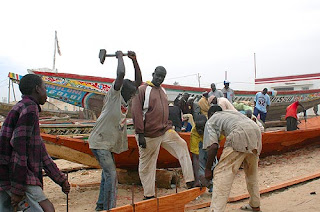 Kayar, Senegal — THEY are known as "the candidates," and the test they face is desperate, dangerous and completely illegal. The odds are about the same as Russian roulette.Yet nearly every mother wants her son to undergo the test and nearly every young man on the faded and tattered streets of Senegal's fishing villages wants to be a candidate.

To become a candidate is to be gilded with heroism. To stay behind with the women, the boys, the old men and the cowards is to know shame.

The test is one of mythic proportions. The men brave the Atlantic in rickety wooden boats with dicey motors, often navigating by the sun and stars to try to find the tiny chips of land that are Europe's back door: the Canary Islands, a Spanish territory 950 miles away, off the west coast of Morocco.Thousands of the would-be immigrants die each year when their "pirogues," open fishing boats that resemble giant canoes, go down. But as they prepare for the greatest journey of their lives, the mood is jubilant, optimistic, exhilarated.They have taken a final bath in holy water.

They have prayed with their families and promised their parents that they will never forget where they came from and will always send home money and help.

They have tied protective talismans with passages from the Koran around their waists."Once we were in the boat, we relaxed. It was fun, as if it was a party. We sang and danced," said Thiacko Ndiaye, 41, of one of the fishing villages, Thiaroye-sur-Mer, who sold his fishing boat and engine to leave. "Everything was wonderful. Everyone was confident that we were going to make it."But the 75-foot pirogue, with 81 terrified men on board, got lost and the waves smashed the timbers at the prow and side."The wooden boat started to break up. That's how we knew we wouldn't make it. We knew it wouldn't get us there, so we turned back," he said. The boat was picked up by a vessel close to Morocco's coast.

The scale of the exodus is extraordinary. Ask anyone in these teeming seaside villages: Nearly all have a relative or friend in Europe. Spanish immigration officials said 31,000 illegal immigrants, 60% of them from Senegal, reached the Canary Islands last year, six times the previous year's number. On a single day in September, 1,000 arrived. By mid-February this year, 1,000 more had landed there.Six hundred bodies washed up last year on the Canary Islands or the African mainland, but Spanish authorities estimate that 6,000 died on their journeys, making the odds of dying similar to playing a game of chance with a six-chambered revolver.

Still, Issa Dieng, 35, a photographer here in Kayar, a village north of the capital, Dakar, feels a compelling, restless energy to be gone. Five months ago, he paid the $700 boat fare to send his brother, who is now working in Florence, Italy."It's reached the point where there is shame not to go, and all the brave and courageous men go. If there's a boat ready to go, I won't miss it," he said.

IN this country where about half the people live below the poverty line and about half the workforce is unemployed, even the humblest job in Europe can help set a Senegalese family up for life. At $70 a day, the average wage in Spain is 35 times higher than Senegal's, at about $2 a day.The candidates send back televisions, music systems and cash, from about $200 a month up.

The new houses going up in dilapidated seashore villages are bought with money sent from Europe, locals say.Modou Diop, 32, a Kayar fisherman, made the journey last year only to be flown back by Spanish authorities after a massive flood of immigrants."Only the women stay behind," Diop said. "I had the courage, the bravery. When people ask you, 'Were you among the candidates, the volunteers?' then you answer with great joy and pride, 'Yes.'"Of course, I became a great hero."Spain repatriated 4,000 who made it to the Canary Islands last year, and European patrols intercepted 53 pirogues with 3,643 would-be immigrants between July and December.Diop intends to try again. He knows about the big waves. Some boats get lost or the outboard motors die. Sometimes food and water run out or people sicken and their bodies are thrown overboard. Sometimes fights break out, not to mention the worst, rarely spoken fear: the demons with lightning in their eyes who might have hitched a ride, disguised as men.

Candidates tell tales of men crazed with seasickness, or terror, or grief for a brother who died on the voyage, hurling themselves into the waves rather than go on.In Yarakh Tableau, a big departure point, children scuttle along narrow sandy alleys and women throw their household trash on the white shore. People here darken with suspicion at strangers with questions about the candidates.

One woman who recently lost a son at sea peeked out of her front door: "I don't know anything about it," she said.There's an added resentment here, a feeling that Western nations vacuum up Africa's resources while keeping a firm clamp on visas. Senegalese fishermen now compete with industrial-scale fishing vessels from Europe and complain that the sea is now so overfished that it's difficult for them to make a living in their own waters.Still, Senegal is not nearly Africa's poorest country: 21 sub-Saharan countries, including the continent's biggest oil power, Nigeria, rate lower on the United Nations Development Program's human development index. The exodus raises questions about why such a large slice of the country's youth, and their parents, wives and families, has lost hope."Those who are going are not the poorest of the poor," said Senegalese political analyst Hamadou Tidiane Sy, blaming the government for failing to stem the tide, and parents for letting sons go in the hope of raising the family's status. "With the whole immigration issue, I think there's a lot of greed. It's a problem of values being lost and faith being lost: faith in oneself, faith in one's country and faith in God."Moussa Ndoya, 28, left Kayar because "you know that if you go to Europe, no matter what happens, it's going to be better than here."Two of 112 candidates on his voyage died of fever after drinking bad water."We had to throw them into the sea," the fisherman said. "The sea was so rough. It was so windy. The waves are not like the waves around here. I was so frightened because one part of the boat broke and water was getting in. We were all racing to bail out water."It happened on the sixth day, forcing all of them to sit at one end. The boat slowed to a crawl to stop the water flooding in, but as the days wore on, panic set in, sparking a brawl."People said, 'We're lost and we're so far from shore.' Some were crying. One day there was a big fight in the boat when some said we must turn back and others said we should go on. The captain said, 'We will never turn back.' "After nine days at sea, the boat made it to Tenerife, the largest of the Canary Islands, but the travelers were among thousands sent back by plane.Senegal is a superstitious country, and fearsome stories of what can go wrong abound, all avidly believed."Sometimes in the middle of the night you see someone with lightning in his eyes," Diop said. "Sometimes you see a man-eater looking at you in the middle of the night on the high seas. Sometimes these demons or man-eaters will say words that you as a human are not ready to hear. You are a simple man with no strong protection: What can you do?"But the weather, the deaths, the demons, the patrols designed to intercept the vessels and even the repatriations do little to discourage candidates. Locals predict that in August, when seas are calm, many more vessels will go.IN many cases, a family meeting is called in which the elder members decide to do all that is necessary to put at least one person on a boat. Sometimes it means that the family's sources of livelihood, such as its boat and engine, cattle or land, must be sold."You see families sell houses, rings, valuables. They're ready to sell everything, and they're happy to do it so their sons can go," said Dieng, the photographer."Most of the family members sit together and discuss the problem and decide together that this one is ready to go.

It's very important for every family to have a candidate."When a candidate gets to Europe and sends back money, the family uses it to build houses, buy cars and often to send more sons to the seas.Standing amid racks of salted, drying fish, Maty Ndaw can't help puffing a little with pride when talking about her three sons, 16, 20 and 23, all candidates who made it across to the other world last year, giving her status and respect among her neighbors. She has a 7-year-old and hopes he will go too when he is old enough."Everyone wants to have a son there," she said. "It's a source of advancement…. It's a great pride to be represented by our sons overseas to enable us to have nicer houses and more money. That way people respect you and think highly of you."Aram Leye, a widow and mother of eight, might have had dreams like that, once. Now, sitting in a dark room with scratched walls and tumbledown furniture, with goats wandering by the door, she mourns her oldest and closest son, Sinii Pate Gueye, 30.She finds herself drawn to the shore early in the morning, where she gazes out to the distant horizon."I have all these memories," she said. "I go to the sea all the time and I say prayers for my son, thinking this is the path he took to his grave. And I feel closer to him."Gueye, a jobless welder in Thiaroye-sur-Mer, went to sea in February last year, leaving his mother, a wife and week-old baby daughter. Nothing was ever heard of the boat or its fate.She has three surviving sons."My other sons will never try it," she said. "No, a thousand times no. No more sea."